At Home in Africa 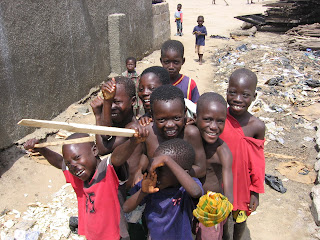 So for starters…the root of the reason I’m here is because of the non-profit that Jana has started called GRAACE. The website www.ahopeforafrica.org explains it a little, but I’ll try to outline our goals a little bit more. It’s a nutrition/agriculture project. Few people here include fruits and vegetables (veggies even less) in their diets. They are much more expensive than the staple cassava, that it’s just not worth it to eat them regularly. Our goal is for the villagers who live rurally to be able to have personal household gardens where they can supply their families with the nutrition that so many are lacking, in turn making their bodies stronger and more able to withstand the many diseases prevalent here. Jana and I met with a micro-finance loan lending organization called Sinapi Aba Trust, that has many branches here in Ghana, to discuss the possibilities of us working with them. We want to target the people who are most ambitious and serious about changing their lives, and those people are the ones using the small loans. All of the clients of Sinapi Aba Trust are motivated to provide for their families. We want to teach these clients using and paying back the loans, about nutrition. We also want to explain why it is so important, and help those interested in having a garden get the necessary supplies to be able to start that. So, as far as donations for this…for the time being, anything donated on the website, www.ahopeforafrica.com, goes directly into a bank account that Jana and I have access to, which we will use for transportation to and from all of these towns and villages, and living expenses and miscellaneous costs as we continue trying to get this set up more officially. In the future, it will go directly towards the Ghanaian people involved in our organization. We, however, are assuring you that we are living in the cheapest way possible; in order to use the money we obtain to help the people here. 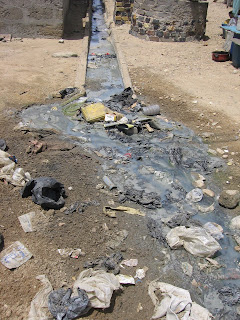 We are also here volunteering for a company called Global Sanitation Solutions, doing some initial ground research for a few products they have developed. There’s more information on their website, www.gsanitation.com and www.gottagotoilet.com. I’m really trying not to make this a novel, so I’ll try to briefly explain. There are actually a couple men in our ward and stake here that are businessmen, running their own environmental businesses, who are very interested in helping us, and have already done much research and planning and guiding us in what we should do. Global has developed a chemical (Chemisan) that eliminates the odor in fecal matter and significantly diminishes many of the harmful pathogens in the waste. They have made bags that you put the waste in, which are made from cornstarch and are biodegradable. So, the package deal…waste, Chemisan and bag, all decomposes in less than 30 days…leaving a safe, organic soil/fertilizer that can be used for gardening. Or if nothing…at least it’s not a hazard to the crops being grown here, not seeping into ground water, and not going into the drains along the roads and creating more sanitation problems, not to mention more smell. 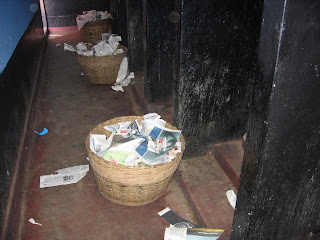 They have so few options for using the toilet…even the community toilets are a disgusting, smelly mess. The people have to pay to go to the bathroom in these places. You can see in the photos that it’s a serious problem. Children and adults alike are defecating on the beach near the ocean, and in the public toilets, they don’t put their wiping paper in the toilet. It is piled up in baskets just outside the wide open stalls. The long term goals for the sanitation will include getting an organization set up, employing Ghanaians to collect the bags and take them to a plant where they can be left to compost, and then utilized by the country as fertilizer, or exported as such, thus stimulating the economy in two ways. We’re also discussing the high probability of the bags, and maybe even the Chemisan, being produced in country (right here in Ghana). The benefits from this project are all around astounding (☺ Like my official sounding words?) Anyway…the point is, this is cool stuff. It’s going to take some time, money and effort, however, to make it possible. This company doesn’t have donation capabilities set up on their site right now. So…money going toward this specific project with Global Sanitation Solutions can be donated through the GRAACE website. In the comments on the Pay Pal page, you can specify that these funds are going to the sanitation project. This money will also be used for our research purposes, and GRAACE will ensure that you will be informed of where your donation will specifically be used for in that project.

And last but not least…yesterday we had the opportunity to go to a city outside of Accra with one of Jana’s friends, Andy Jones. This city is mostly made up of about 27,000 Liberian refugees. The camp was established about 17 years ago, after Liberia broke into a huge civil war. I was talking to one of the men helping us, and asking him how long he had lived there. He said that he came 10 years ago as a 12 year old boy, all alone. His father had been killed on the spot in Liberia, and he left all his family to get away from the fighting, and hasn’t heard from them since. You could talk to thousands of people that live there, who have similar stories. It was a pretty intense feeling, being there, and witnessing that first hand…I never felt anything as strong, not even while watching Hotel Rwanda or hearing about the refugees from Darfur. These that we work with and have seen are REAL people…not just actors or numbers or obscure individuals thousands of miles away. And they don’t have any options. They can’t get jobs here because there are prejudices against Liberians, because they are not Ghanaina, and it’s hard to get work permits. Liberia still isn’t safe to go back to and even if it was…what do they have to go back to? I asked this man if they were happy here. All he could say was that he was grateful that they had peace and security. Wow. I sure take that for granted just about every day. Sorry…I’m getting carried away. I was just really effected by being there yesterday. Let’s get to the point. Andy is working to set up an orphanage for the approximately 30 young teenage kids who have no home or family (orphans, obviously). So he wants them to have a place to stay, three meals to eat a day, and to be able to go to school. He also wants to set up an internet café that can be income generating, so the orphanage can be self-sustaining. He is working with the local LDS church leaders in the camp to organize and implement this. 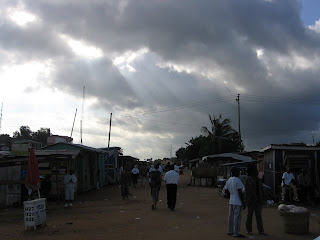 Andy has impressed us greatly, because of his sincere desire and willingness to give all that he can spare to the people in Ghana. He makes sure his family which includes his wife and his four children are provided for, but they too have a huge role in the work by patiently living very modestly. The funds are absolutely not being misused or misdirected, and I can promise that. I haven’t had a chance to read through his website, www.africaheartwoodproject.com, but I understand that you can purchase drums…the profit from that going to his non-profit organization, and you also have the chance to add $5 or $10 or whatever in addition to your purchase for the funds for projects like the orphands in the refugee camp. I think there are other ways of just donating…but you’d have to see for yourself.

There is obviously so much someone can do to help and serve, and it for sure doesn’t have to include any of these ways. We’re just here and this is what we are doing, and what we see that needs to be done, so you can decide for yourself what or even if you want to contribute. These things will get done one way or another because they are sincerely good and needed things. But one thing we do ask of you is this; please forward this on to as many people as you know that might have interest in any of this, or to people who might know other people who would be wiling to help.
I know this did turn into something of a novel…and I apologize for that. Now you can get back to work ☺ Thanks for all your support regardless! We’ll be in touch!! 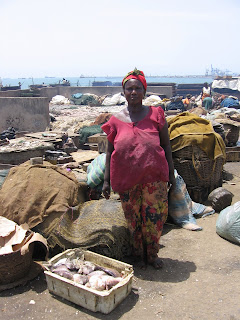 I am amazed and humbled at your entire program. You are truly involved in a great work.